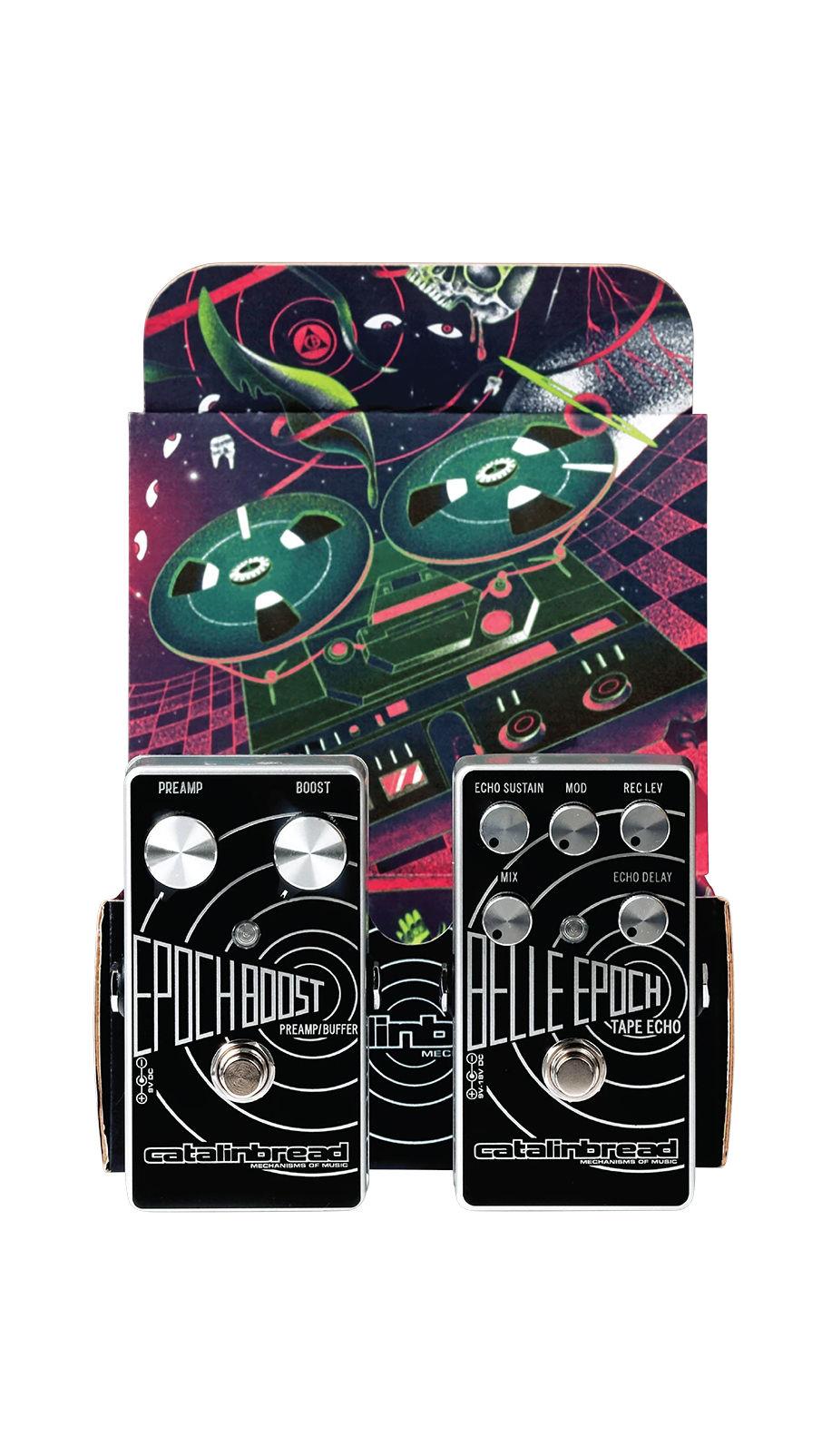 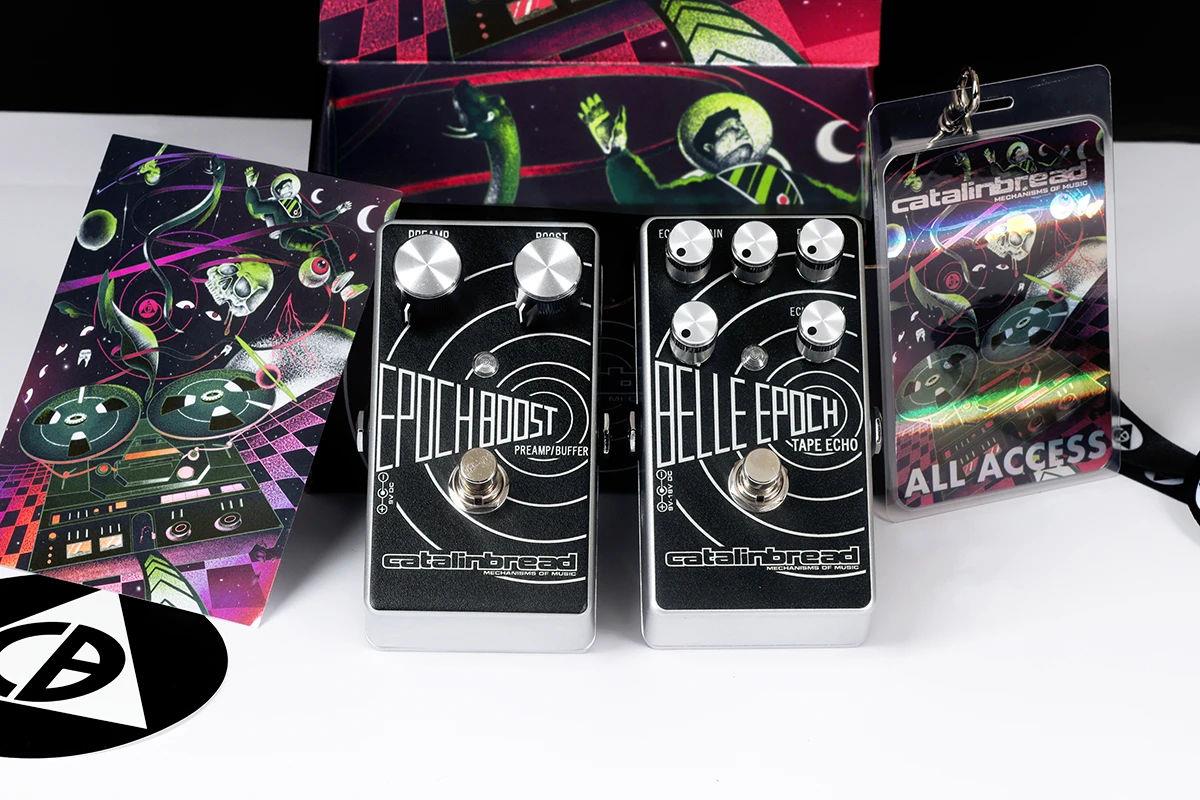 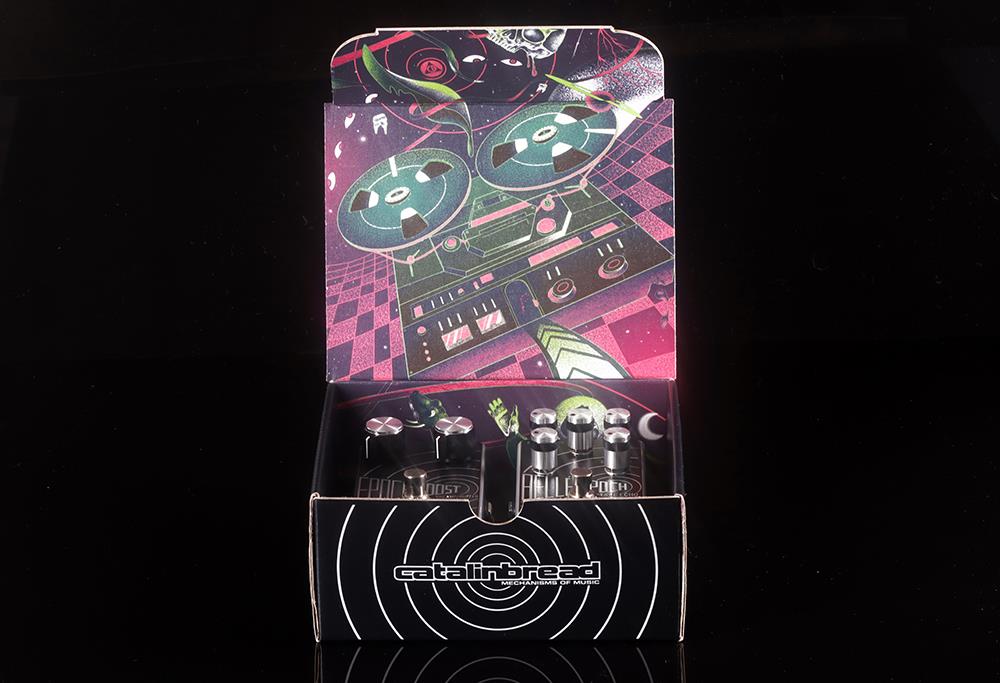 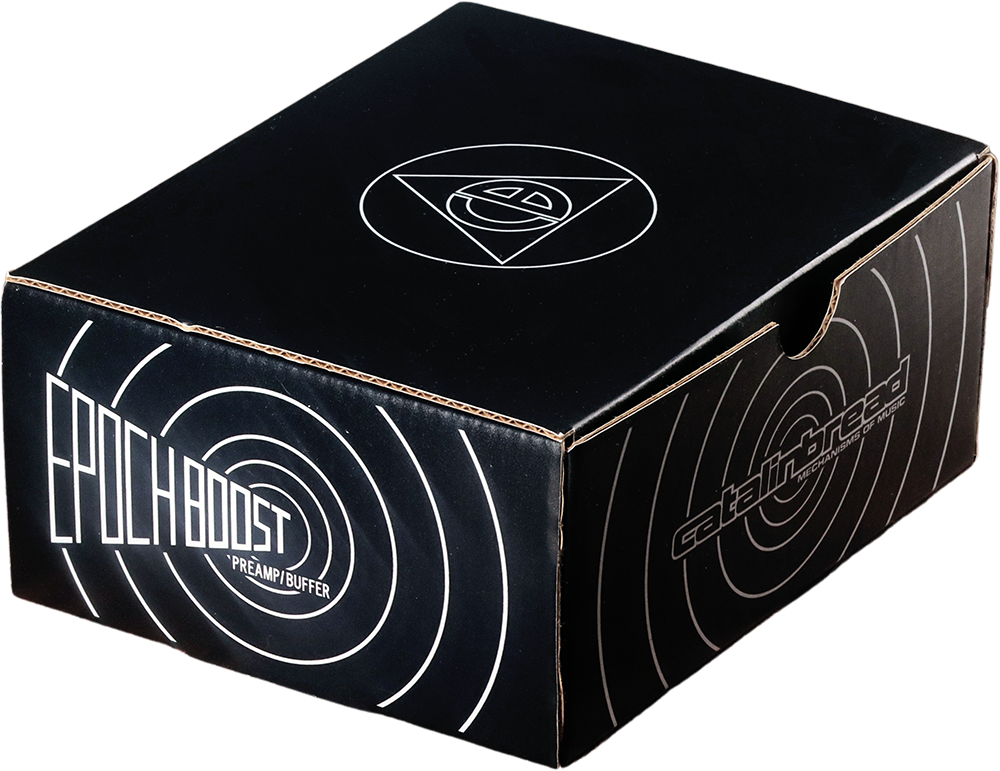 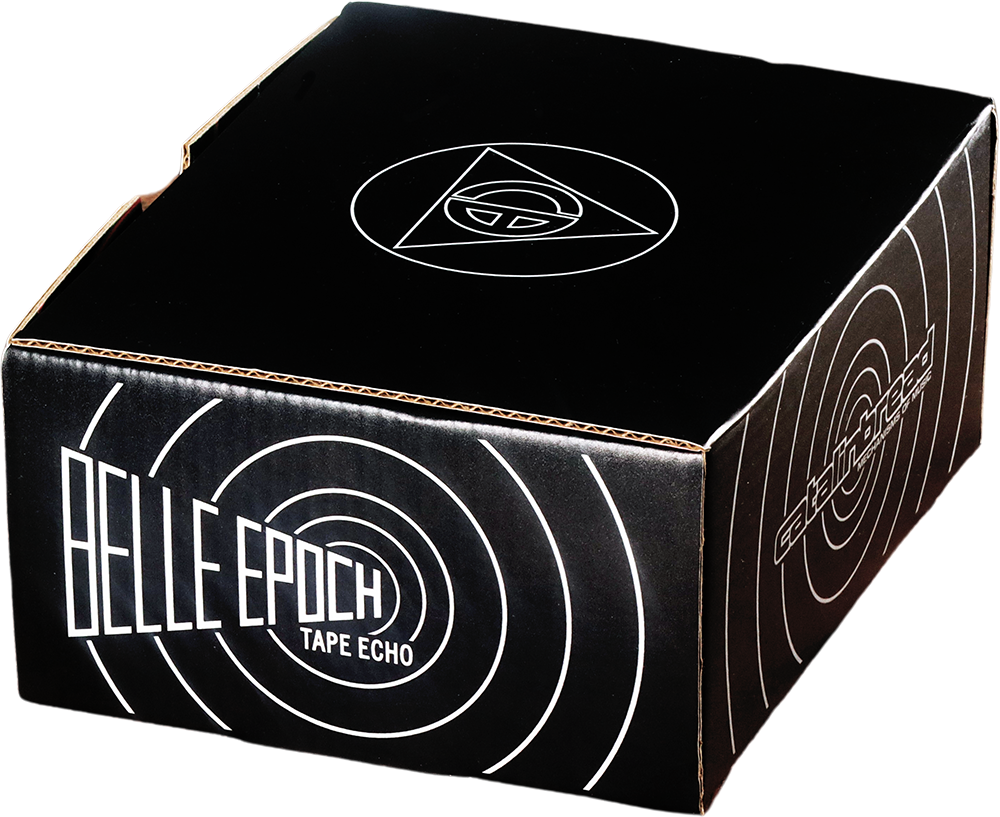 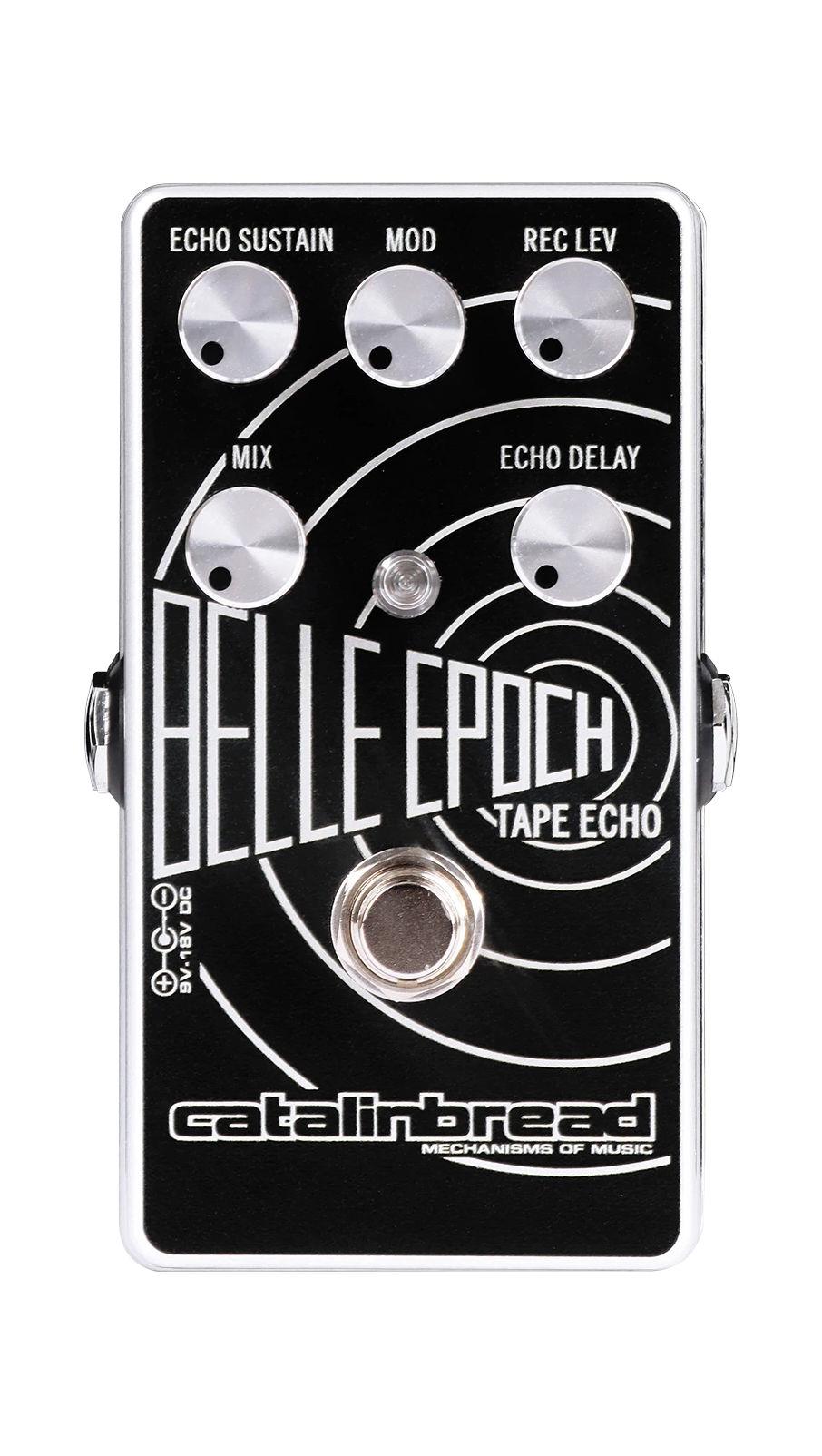 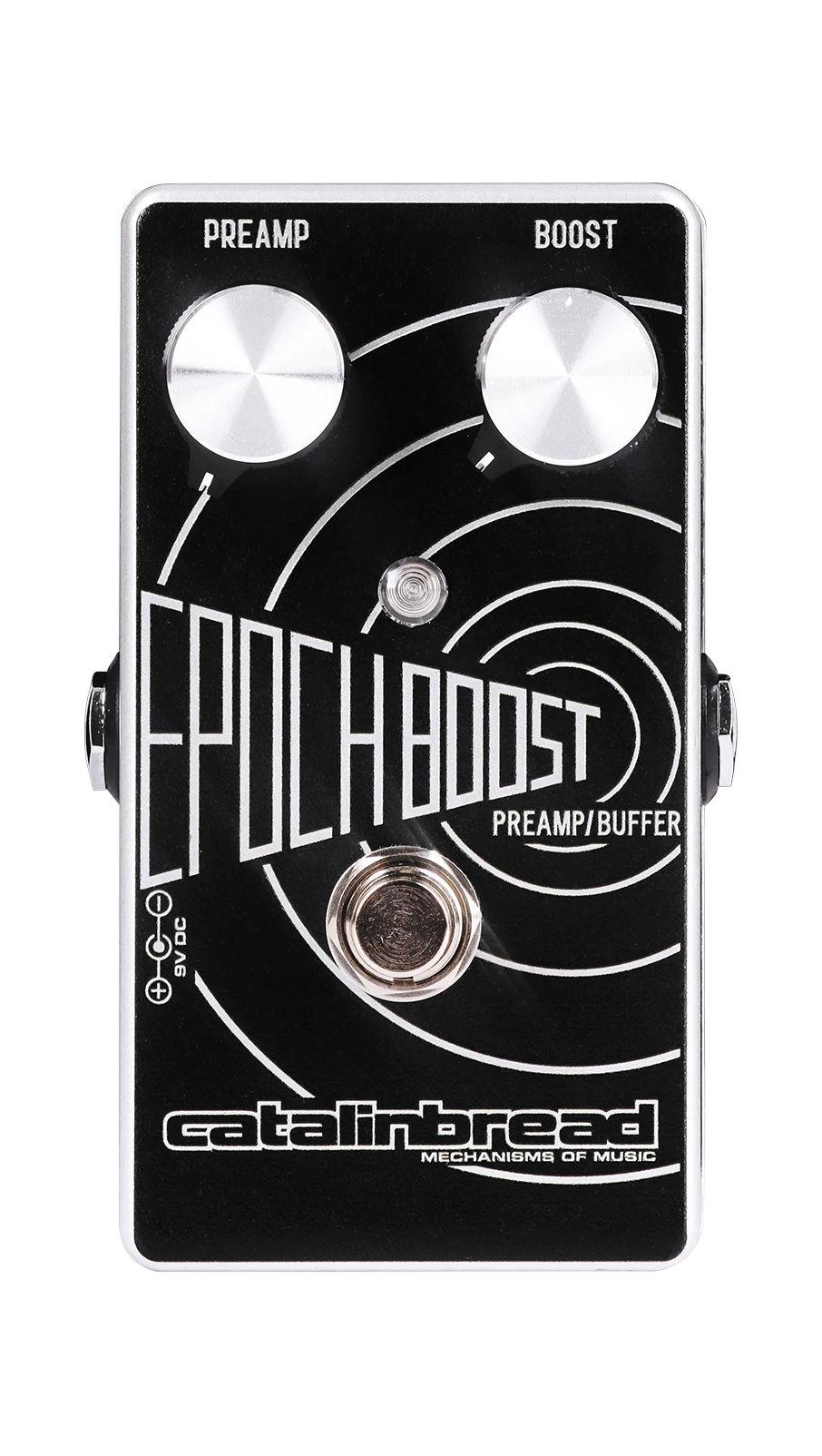 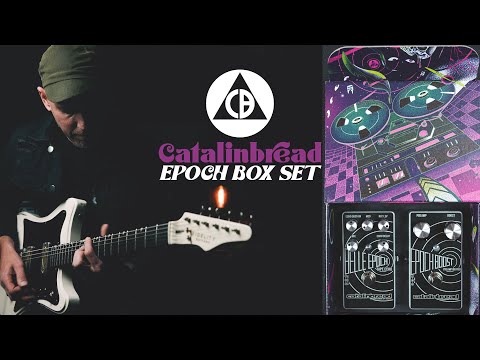 *Only 500 units of this limited edition set available worldwide!*

Alright, let’s get geeky for a second. The Belle Epoch was modeled after the EP-3 and the preamp is an approximation of the Echoplex preamp and it sounds really really close. The Belle Epoch Deluxe, however, is not an approximation; it has the exact EP-3 specs in it–using the “later" mode preamp circuit. The Epoch Boost also has the exact EP-3 specs, but uses the "early" mode pre. The "early" and "later" mode differences are slight but they are noticeable, one with a flat frequency response and the other a brighter one.

So why are some people buying the Epoch Boost and the regular Belle Epoch instead of just the Belle Epoch Deluxe? It boils down to specific needs and modularity. One of the awesome things about the Belle Epoch Deluxe is that you can pop it into trails mode and have the preamp on all of the time, sweetening up your tone even when the delay is bypassed, but wherever the Belle Epoch Deluxe lives in your chain, the delay and the preamp live together and cannot be separated. That’s where the idea for this box set comes in. Let’s say you want the Belle Epoch delay but want the option to put the EP-3 style preamp (Epoch Boost) somewhere in the chain that isn’t tied to your delay. Maybe you want it at the beginning with the boost cranked to make everything after it sing, or at the end; always-on to refine your entire sound. Some people like using the pre to fatten up their signal before stacking with their dirt section. In this configuration, your options are only limited by your other gear.

Faithful sonic recreation of the EP-3 tape echo. Yes, including the preamp.

"The Catalinbread Belle Epoch is the closest thing to a real EP-3 that I’ve ever played."- Eric Johnson

The Catalinbread Belle Epoch Tape Echo, has tape echo sounds so authentic you’d swear there was tape inside the pedal! Inspired by the Maestro Echoplex, EP-3 model, perhaps the most famous tape delay ever, the Belle Epoch features everything we love about the EP-3 in a small, maintenance free pedal format. We felt that a “tape echo” pedal was much more than just a standard digital delay with some “filtering” on the repeats. There are a lot of subtle and not-so-subtle traits of the Echoplex that needed to be implemented in order to be authentic. The preamp, the self-oscillation character, the ability to control the “record level” of the signal hitting “tape”, the wow and flutter, the way the repeats decay, the way the circuit interfaces with the amp and other pedals - all these things were important to get right. The original unit was used as a musical instrument unto itself and this is what we captured with the Belle Epoch.

Preamp - Famous for making your guitar sound better even when the echoes are turned off.

Quality of repeats - The Echoplex was not necessarily “hi-fi”. As the echoes repeated, the signal got progressively degraded, losing low end and gaining a shiny, percussive top end with a bit of grit. The first repeat is strong and then it gets more and more diffused as it repeats. And in a well-tuned unit, you could dial in the repeats “Echo Sustain” so that it would float almost indefinitely, or cross the threshold to self-oscillation

Record level -  There’s a control on the EP-3 that sets how hard the tape gets hit. While this control was ostensibly used to optimize signal-to-noise ratio, set low it would give light and airy repeats and set high it would saturate the tape hard and give an awesome fat and grungy repeat tone.

Head drag - The original unit had a unique quality that when moving the delay time slider it took a moment to catch up to the adjustment, creating a doppler like effect. The Belle Epoch reproduces this behavior while you turn the echo delay knob.

To get acquainted with your new Belle Epoch, let’s first plug it in by itself, without your other pedals. Start out with a clean sound from your amp. Set the Mix to noon, the Echo Sustain and Sway/Mod at minimum, and the delay time, Echo Delay, anywhere you like. Now play and try various settings on the Tone/Record Level knob. Notice when set low the repeat is very wispy and quiet and when set high it is very dense and loud with a bit of gritty distortion. You’ll come to appreciate this control the more you get to know your Belle Epoch. You can set your echoes for background ambience or you can set them to be loud, punchy, and in your face. This is much more effective than a simple traditional “tone” knob and is exclusive to the Belle Epoch. Now explore the Echo Sustain knob. In the rst half of its rotation, you’ll get a xed number of repeats with a perfect decay. Then around 1:00 to 2:00 you can dial it in so that the repeats go on almost indefinitely without building up. Beyond that point and you’ve entered the self-oscillation zone! Now start twisting the Echo Delay knob to really start having some fun. But beware! It might get loud! Turn the Mix control down to avoid exploding your amp or to avoid getting an eviction notice! Now dial in a bit of Sway/Mod and listen to the random tape warble on the echoes. A little dab will do ya with this control! Try setting the Mix control all the way down so you only hear the dry signal and compare the sound and touch-sensitivity with the pedal on and o. You may decide you always want it on! You can turn the Mix control all the way up to hear the echo signal only too. This may be all you need to get up and running but do come back and read the rest of this guide to get more insight into the fabulous Belle Epoch!

You’ve heard the rumors: Some of rock ‘n’ roll’s greatest tones were achieved without pedals. Not so fast! While that’s technically true, some of the most venerable guitar gods relied on an old tape echo unit to help achieve their legendary tones. This unit is the Maestro Echoplex EP-3. While some guitarists made great use of its echo effect, others dragged one to every gig just for its magical preamp. This preamp circuit was wired always-on, and so even those using it as an echo effect received significant tonal enhancements from the preamp circuit as well. Everyone from Eddie Van Halen to East Bay Ray of the Dead Kennedys relied on the EP-3 preamp to take their sound to previously unreachable heights. And now you can also, with our Epoch Boost.

Around the shop, we refer to the Epoch Boost as a “mastering pedal,” because it sounds like your base tone, but sculpted to perfection by a mastering engineer. This is accomplished  by employing the same internal circuitry as a real EP-3, from the NOS Orange Drop capacitors to the output mixer stage that acts as a rudimentary frequency selector---it’s all there. We’ve taken the liberty of kicking the internal voltage all the way up to 22 volts, just like the original unit, giving you unparalleled headroom and clarity. Inside, we’ve included a switchable hi-Z input buffer if you’d like to use the Epoch Boost as your only pedal (don’t worry, we won’t judge). The Boost control gives you just the EP-3 tone when rolled off, but adds up to 20dB of crystal-clear boost as you crank it. And trust us, you’re gonna want to. 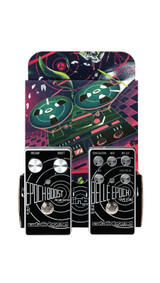 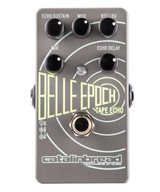 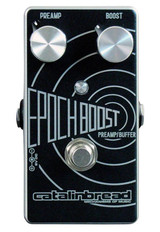