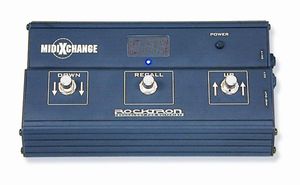 The MIDI Xchange is a simple to use, yet multi-functional MIDI switcher that not only controls Rocktron products, but other MIDI switchable products as well. Two built-in expression ports allow you to plug in up to two Rocktron HEX expression/volume controllers for continuous controlling of all sorts of parameters.

A great feature of the MIDI Xchange is that it runs on a 9-volt battery, as well as external power. Thus, if you are doing a gig where it is hard to run power out to your floor pedals  you wont have any problem with the MIDI Xchange as battery operation will allow you to make the preset controller changes you need. And, the MIDI Xchange is also phantom powerable through select Rocktron processors and amplifiers.

A three segment display shows you the preset you are on or which controller assignment has been selected. A power switch is provided to turn on or off the MIDI Xchange. Upon turning on the unit, the display will flash the number "1" at which point you may either press the RECALL switch to select preset "1" or use the UP and DOWN buttons to select the desired preset number  then press the RECALL button to choose the selected preset.

The MIDI Xchange provides "SMART CONTROLLERS" not commonly seen in low-cost MIDI footswitches. What are SMART CONTROLLERS? Typically with most MIDI footcontrollers, when using continuous controller pedals the "status" of the pedals are not reported when a new preset command has been sent. This would most likely cause a discontinuity in volume requiring the user to step on his volume pedal to correct the change, thus updating the pedal status manually. The MIDI Xchange issues "current status" of both controller pedal ports upon the recall program change command being sent out. Also, auto enable of these controller messages are detected when any of the two ports have a pedal attached to them. Everything is handled by the MIDI Xchange for ease of use!

An example of this would be  when you reduce the volume of preset 1 with an expression pedal  when switching to preset 2, unlike other typical MIDI controllers, the MIDI Xchange will automatically detect the position of the pedal and apply that to the volume of preset 2  thus no loud or abrupt volume changes. This is ideal in a live situation.