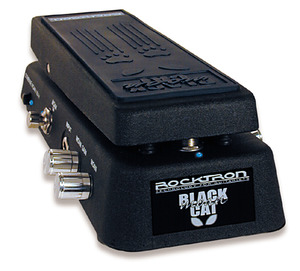 Get more out of your wah wah pedal with a Black Cat Moan. Rocktron introduces a new breed as the Cat goes on the prowl!

Rocktron’s new Black Cat Moan is a multi-functional wah pedal that offers extremely useful and musical features. Built-in germanium diodes provide a unique sweepable sonic effect (THE MOAN) that can act as a stand alone distortion and can be combined with the wah for an effect that cries harder and sweeter than a baby.

The Moan effect has been specifically designed for heavy distortion situations, although it can be used in all situations. The Moan effect will be most apparent when using a heavier distortion. The effect can sometimes be subtle depending on the natural harmonics of your guitar or bass.

The Black Cat Moan has a three position selector switch that allows you to choose one of three different wah voicing modes. While the Cat is an amazing tool for guitar players, the third mode, now get this, is "BASS" – yes – that is right – BASS! Plug this into a bass rig and you won’t believe how moanfully sweet it is!

A Wah ON/OFF switch is located under the toe of the rocker footpedal while a side "kicker" switch is used to turn the MOAN effect On or OFF. The MOAN can be used as a stand alone distortion or applied to the wah effect using the COMBINE MOAN/WAH switch.